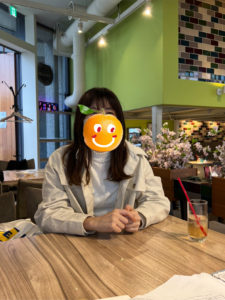 Shoko has been studying the TOEIC course at Bond English 1x a week for several months. She was also studying TOEIC at home almost 4 days a week for about 2 hours per day!

Shoko wanted to take the TOEIC対策 so she could possibly get a job promotion at her hotel: hotel New Ohtani!

Shoko is from Tokushima, and she moved to Osaka to attend Kansai Gaidai Kokugo, where she majored in English.

During her college years she worked a part-time job as a Juku English teacher.  In college, she read famous English literature such as The Great Gatsby and Macbeth by Shakespeare, all of which helped her get a good score on her TOEIC test!  Congratulations Shoko!!

(Shoko is a little shy, so we added the tangerine to her pic!)