For me, spring skiing conditions, with the warm temperatures, huge soft white moguls, green trees and grass, and cloudless blue skies, have probably always been my favorite. It is when my brother and I, at around age 12, first discovered the sport of mogul skiing. Or to say more accurately, it is when we first saw humans doing things we had never thought possible. There, on the slopes of Killington, and specifically on the trail Outer Limits, we saw US World Cup Mogul skiers Steve Desovich, Bob Aldighieri, Chuck Martin, John Witt, moving and skiing in unimaginable ways. It took us several years to understand who they were, what they were doing, and what that big ‘ASKS’ logo was on the back of their tops. The ASKS logo was actually the ASICS shoe company, who somehow had gotten the contract to design and produce the US Freestyle Ski Team’s competition uniforms. Wow that was the most futuristic fashion we had ever seen live, making those skiers into more of a visiting group of advanced humans from a different place than any regular athlete from Earth.

This burning love of spring mogul skiing, lay dormant for years when I moved to Japan in 2011. But a few years ago, after hearing that Happo-One stayed open every year through the Golden Week holiday in early May, I knew I had to go there to shred.

From Osaka, it’s about a 5-hour drive to the Hakuba Valley in Nagano, site of the ‘98 Winter Olympics. The first glimpses of the nearly 3000m high mountains, completely covered in snow, from the warm and green lower ground of southern Nagano, on May 4, definitely took our breath away: 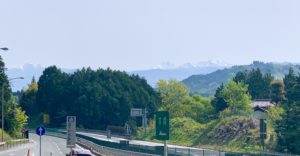 But as we got closer, the reflections of the mountains off of the Japanese rice fields, anchored the reality that soon we would be atop those mountains in a mogul fantasy, pure heaven on Earth! 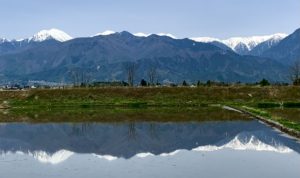 After leaving Osaka at 5am, with several breaks on the way, we arrived at ski area Happo-One around 11:30, and rode the gondola up to the snow!

When we arrived at the top area of the mountain, called Usagidaira, elevation nearly 1,500m, we found a heavenly snow playground ready for high-speed action:

Look at those moguls!!!

Thanks to intense leg, core, and upper body training for the past several years, I managed some respectable turns! 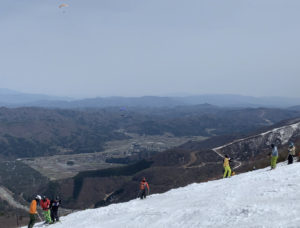 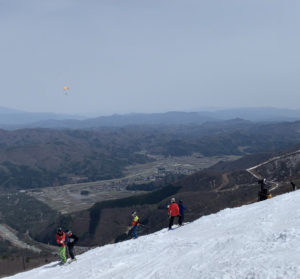 There was also incredible views of the Japanese ‘alps’, seeming more like a fantasy dream than real: 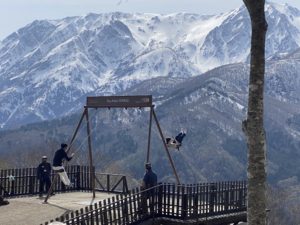 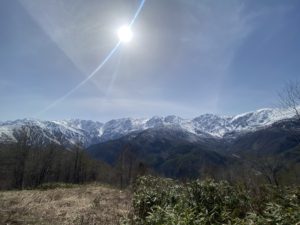 IMG_2041
We rented a 3BR suite at the Hakuba Powder Mountain lodge, with full eat-in kitchen, 2 beds in every BR, and a loft!

Thank you to Happo-One for staying open for skiing until the end of Golden Week.

Actually, they could probably make it all the way to June 1!