***Interesting News*** – What Pyramids Are Really Used For!

Have you ever heard that the Giza pyramids of Egypt are perfectly facing certain stars in space?   And that this positioning was done on purpose for some scientific reason?   And that they were built by some group which had a very sophisticated level of technological understanding, possibly more advanced than the current level we have achieved?

Whatever your answers may be to these questions, I do have a personal experience to share which I believe you will find very interesting. 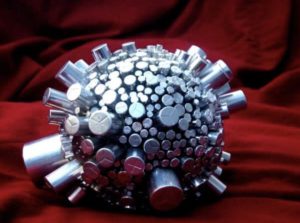 While living on the top 2 floors of a brownstone-type building in Brooklyn, NY, there were 3 small DIRECTV satellite dishes on our roof, all of which were not in use.

Absolutely fascinated at how it was physically possible to send communication energy from space satellites, have that energy received via satellite dish on Earth, and then organized into a 2D moving image, with synchronized audio, of a human!, which to be clear, is a crude form of teleportation, and coupled with my new exciting EWAP project, I can’t describe the level of excitement I had at the thought of taking those dishes apart to see what parts were inside.

So after getting permission from the landlord I climbed up on the roof with a tool kit and started dismantling one of the DIRECTV dishes. You know the arm which extends out from the base, holding the component which is positioned in the dishes center, which faces back into the dish ?

Well the actual tip of the arm which faces back into the satellite dish had a small white plastic cover on it.  And what I can say is that as I got ready to remove the plastic cover and see what part was inside, there was a palpable feeling of Christmas-kiddom excitement as I realized that I would soon be able to peer directly into the component which makes communication from space to earth possible. 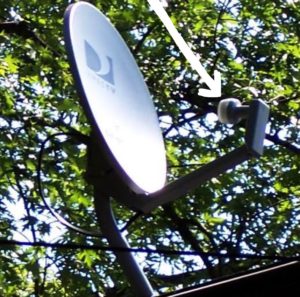 You’ll never guess in a million years what was sitting there under the plastic cover, pointing directly at the center of the dish: a pyramid.

A small, maybe 3 cm high, pyramid.  And get this: no wires.  The wires and circuitry started at the base of the arm.  There were absolutely zero wires or circuits attached to, or near, the pyramid.

So what I can personally confirm after taking apart the receiving end of a satellite communication space based system that is in use currently, and holding one of the key components in my hand, and observing it at length, is that pyramids are used as a highly technological and scientific tool for coherently focusing energy coming from space for the purpose of communication.

And when I saw and held that pyramid in my own hands, I immediately and instantly knew that the great pyramids of earth were used by previous advanced human civilizations for the purpose of communicating with other groups in space, and that the story we were all told in school, about the pyramids being a grave for some king, was the biggest bunch of baloney dis-info smokescreen-nonsense, told to us to try to hide from the public what the pyramids were really used for: direct and open communication with others in space by previous advanced earth humans.